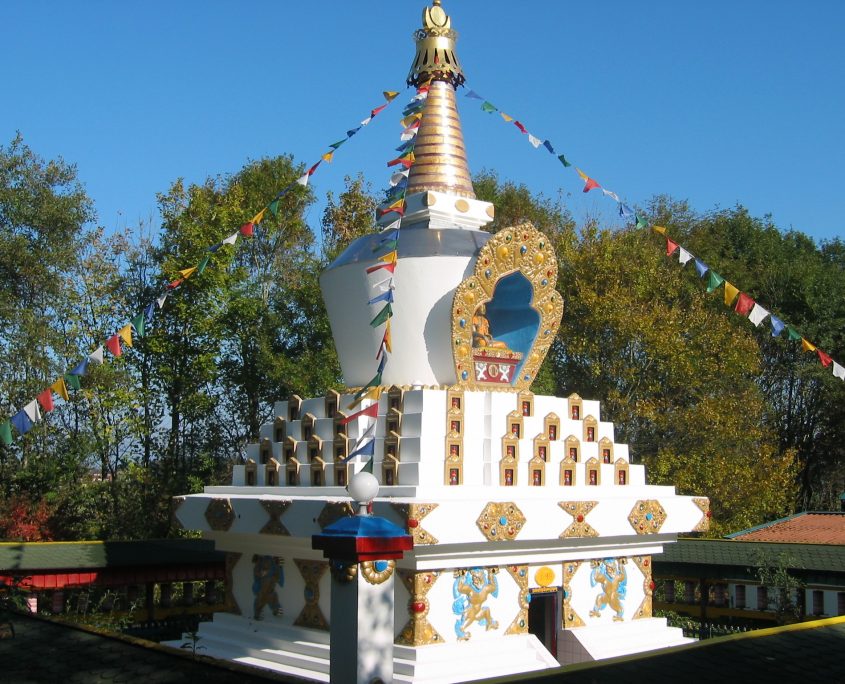 The stupa in Hantum is a 13-meter high “Tashi Gomang stupa”, which means the stupa of the many gates of auspiciousness. The stupa was built according to the Tibetan tradition. The gates or niches on the stupa are like treasure palaces that bring about prosperity, happiness, love, wealth and harmony. This stupa was built in the time of the Cold War (1988) to restore and maintain world peace.

It is said that a stupa is like a wish-fulfilling-jewel. The great positive effects of building, venerating and maintaining a stupa are described in the teachings of the Buddha such as removing obstacles and ripening the seeds of enlightenment. A stupa is venerated by making circumambulation (turning clockwise), by making offerings (flowers, candles, etc.) and by showing respect through body, speech and mind.

The stupa contains holy objects such as relics (ringsel) from the Buddha Eusung, the Third Buddha from the past era before Buddha Shakyamuni. These extremely rare relics were offered by the 3rd Jamgon Kongtrul Rinpoche during his visit to the centre in 1987 just before the beginning of the construction.

In 1999, a mala of 108 prayer wheels (mani khorlo) were placed around the stupa. These prayer wheels are filled with scrolls of long papers with thousands of mantras. By turning the prayer wheels, it is said that it has the same effect as the recitation of these mantras for the benefit of all beings. Prayers of love, long-life, prosperity and happiness are spread all over the universe when one turns these prayer wheels.